Knowledgebase
3299
No Comments
Share Tweet Share Share Pin it
1 – Digital Gold To call Bitcoin as ‘Digital Gold’ has got reasons. The notable qualities of bitcoin, more precisely, more improved ones over gold include its cheaper transport all over the world due to its secured online transaction. The government or any central bank does not control BTC, and therefore, bitcoin owners can easily 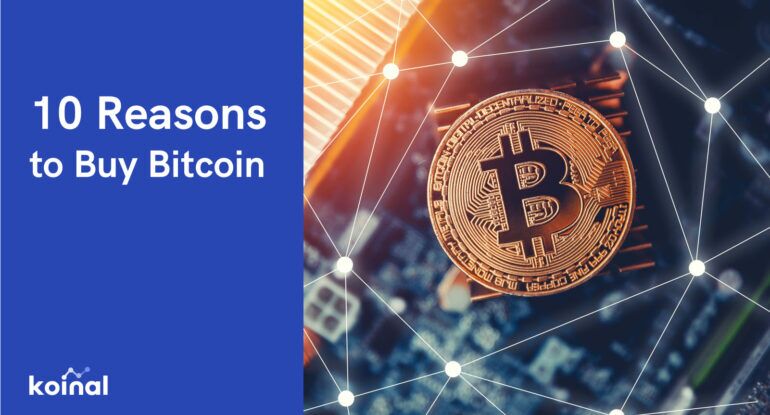 To call Bitcoin as ‘Digital Gold’ has got reasons. The notable qualities of bitcoin, more precisely, more improved ones over gold include its cheaper transport all over the world due to its secured online transaction. The government or any central bank does not control BTC, and therefore, bitcoin owners can easily verify its amount. Also, due to its limited supply, BTC tends to have increased value. Unlike gold, Bitcoin does not depreciate and, therefore, is an exceptional store of value.

Since this digital asset is decentralized, bitcoin transactions cannot be seized by any entity and therefore, it cannot be censored. Decentralization means that governments and big banks cannot censor your digital money. Doesn’t it seem to be a compelling reason for investing in bitcoin in 2020?

3- Bitcoin can not be Confiscated

Fiat currencies are likely to be frozen by central banks; besides, the government of your country can seize your assets even without warning. Fret not! Bitcoin is a digital asset that is not controlled by the government or any bank. So, you can keep your bitcoin safe in your wallet with private keys. Enjoy your control over your digital asset without any intervention from the government.

No doubt, international payments are not only expensive but also time-consuming. Although Bitcoin also has transaction fees but to be fair, its transaction incurs comparatively low fees. Back in 2019, the transaction fee of Bitcoin was $3.4.

So, if you don’t want to wait for long and pay outrageous fees for the transaction, Bitcoin is a worth-investing digital currency.

The decentralized blockchain of bitcoin is transparent and offers its owners financial liberty. Despite being a transparent payment network all across the world, Bitcoin offers adequate privacy to its users when it is used correctly. Precisely, all transactions of bitcoin are public and anyone can trace them.

The dramatic rise in the value of Bitcoin is attributable to its scarcity. There are just 21 million Bitcoins. Regarding this fixed number, if Bitcoin is evenly distributed among all people on earth, each person will get only 0.0023 bitcoin.

The supply of Bitcoin is limited, and fewer BTC is created over time. Also, the bitcoin reward for block mining gets halved after every 4 years while the inflation rate declines over time.

For your information, the next bitcoin halving will take place in May 2020, while the inflation is predicted to be decreased by 1.8%, implying that BTC will be stronger than the dollar. This makes a good reason for you to buy bitcoin in 2020.

As per predictions, Bitcoin is going to be the potential cryptocurrency to invest in 2020. Bitcoin will be touching $1 million by the year 2020, says ‘John McAfee.’ Also, bitcoin’s trading volume has shown a positive trend as it touched around $9000 in previous months.

Moreover, the market cap of Bitcoin is $130 billion. A high wave for bitcoin price is being predicted after the bitcoin halving, so it’s going to be a good reason to buy bitcoin.

For investors, Bitcoin remains a good investment due to its diverse portfolio and improved risk management.

10 – Not Influenced by Inflation

Unlike fiat money, Bitcoin is not impacted by the fluctuations in the inflation rate. Due to a fixed number of bitcoin, limited coins are issued that helps avoid this problem of devaluation as fiat money resulting from monetary policies.

Based on the reasons as mentioned above to buy bitcoin, it is worthy to say that Bitcoin is going to be the future of money.

So, if you have already decided to buy bitcoin, Koinal can be your secured, easy, and convenient way to purchase bitcoin. Here, you can buy bitcoin with your debit and credit card with a simple verification process. So, what are you waiting for?