News Uncategorized
1
No Comments
Share Tweet Share Share Pin it
The oracle price service system, Chainlink, partnered with SWIFT. Lately, Swift announced that they would have some cooperation ahead with Chainlink through chain-cross cryptocurrency transactions. This project will allow users to have access to both traditional and digital payments at the same time in one network. What is SWIFT? The word SWIFT stands for Society 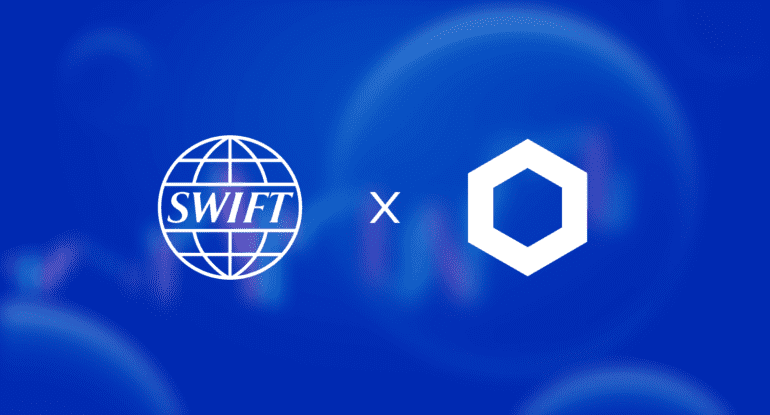 The oracle price service system, Chainlink, partnered with SWIFT. Lately, Swift announced that they would have some cooperation ahead with Chainlink through chain-cross cryptocurrency transactions. This project will allow users to have access to both traditional and digital payments at the same time in one network.

The word SWIFT stands for Society for Worldwide Interbank Financial Telecommunication. On the other hand, SWIFT is a member-owned cooperative and the world’s biggest operator of secure financial communications services. SWIFT provides services for processing transactions and payments between banks worldwide. As a result, SWIFT helps us to transfer money or create any transaction from one side of the world to the other.

The SWIFT interbank messaging service connects over 11,000 banks globally. SWIFT is the most commonly applied platform for standard international financial transactions. In August 2020, the platform had an estimated 44.8 million transactions daily.

Chainlink (LINK) is a crypto and software system. The mechanism of Chainlink allows non-blockchain companies to interact safely with Blockchain networks. Chainlink is a platform that links blockchain-based smart contracts with outer data, like market value or any other data that needs to be connected to Blockchain. A decentralised platform is recognised as Chainlink. Chainlink is an oracle provider. They gather multiple data from different sources and decentralise them. In addition, the process helps to secure the data.

Oracle is the system Chainlink uses to gather data off the Blockchain and bring them into the ecosystem like Ethereum. An oracle permits an Ethereum smart contract to automatically operate a chain of operations. Blockchains like Ethereum use tools called “smart contracts. Smart contracts effectively follow the path through their relationship’s obligations if all necessary criteria are valid.

What will come up with SWIFT?

Previously SWIFT released that due to the increasing speed of their transaction, they are experimenting with alternative ways to make the Blockchain-based digital resource more compatible with traditional assets. Later, Sergey Nazarov, the co-founder of Chainlink, in a conference with SWIFT strategy director Jonathan Ehrenfeld Solé on the 28th of September, revealed the latest update about their partnership. In this announcement, they said that SWIFT partnered with Chainlink to work on Proof-Of-Concept based on Oracle price as an Interbank communication system. This partnership permits SWIFT to merge traditional transactions into the Blockchain. At the conference, Solé mentioned that they face significant demand from financial institutions due to their interest in cryptocurrency. Solé said that these users are keen to see a platform where they can simultaneously access traditional and modern monetary funds.

Proof-of-concept (POC), as its meaning, is a process in which the goal is to discover how a theory can be converted into a realisation. A proof of concept is designed to assess the possibility of an approach or to confirm that it will work.

In the crypto world, the Proof of concept is somehow the same. In the Blockchain, Proof of Concept is the method for identifying regardless of an invention has real-world viability. Its objective is to evaluate whether the product is viable and will perform as expected.

How Can SWIFT Enter the Crypto Market?

As long as SWIFT data sources are off the chain, Chainlink uses Oracle to collect the data and bring them to the Blockchain. This collaboration provides an opportunity for SWIFT to connect with Chainlink and work on the Proof of concept project. The whole project facilitates old-fashioned companies to create transactions over Blockchain.

Sergey Nazarov, the co-founder of Chainlink, in the latest conference of smartCon, revealed that: “Swift will use CCIP in the first stage as a proof of concept. CCIP stands for Cross-Chain Interoperability Protocol. The CCIP protocol will let SWIFT communicate to order on-chain token transactions, assisting the SWIFT platform to be compatible with all blockchains.

What is the role of Proof of concept for Swift adoption?

The Proof of Concept (POC) uses Chainlink’s cross-chain interoperability protocol (CCIP). This protocol allows SWIFT messages to redirect token transactions through nearly every Blockchain network, which Nazarov believes will speed up the implementation of decentralised technology (DLT) blockchains throughout all financial systems, even classic financial services.

The Proof of concept will provide a faster transaction process for SWIFT, benefiting both customers and the business owner.

Chainlink’s collaboration with SWIFT will create new features for its customers. Financial institutions which use the SWIFT platform don’t need to use any other website or technology to change their assets into cryptocurrency. SWIFT cooperates with Chainlink so their customers can easily integrate crypto into their classic systems. However, integrating crypto and fiat currency on SWIFT might be costly for customers.

Another advantage of this collaboration, as Solé, the digital director of SWIFT, said, is that the traditional finance players can match various forms of investment.

As the owner of Mastercard mentioned at a panel session in May on CBDCs, it seems there will be no classic SWIFT in 5 years. However, the strategy director of SWIFT said that this cooperation is an “undeniable interest” from crypto investors. The desire for crypto assets is growing every day. Every day more people tend to invest in cryptocurrencies. Also, governments like the UK are focusing on creating more specific laws to improve the digital asset user experience. In addition, the SWIFT collaboration will build a bridge between modern and classic funds.