Knowledgebase
6830
No Comments
Share Tweet Share Share Pin it
The Bitcoin halving event is expected to happen in May 2020. Many people are into buying Bitcoin from numerous platforms. Koinal is one of those cryptocurrency exchange platforms that offer Bitcoin trading in a secure and reliable way. 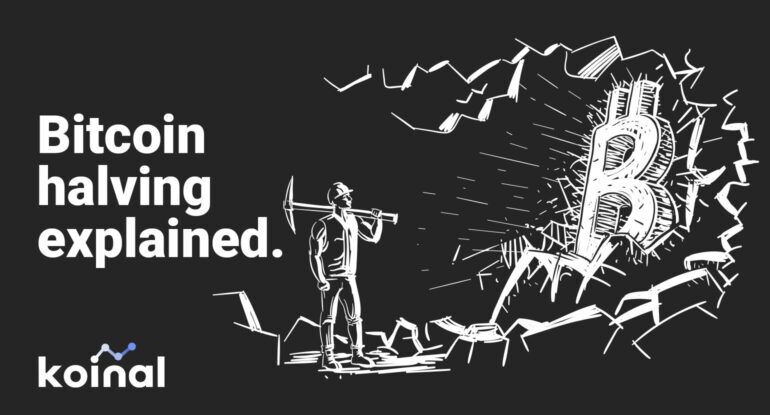 But many questions are also bothering cryptocurrency enthusiasts like you such as what does Bitcoin halving mean? How can it affect the price of Bitcoin? Does it affect miners too?

Well, in this guide, you’ll get to know the answers to your questions about Bitcoin halving. Keep on reading.

Bitcoin (BTC), which is the pioneer of cryptocurrency, undergoes a process known as ‘halving’ after every 210,000 blocks are created. This halving process occurs every 4 years. Satoshi Nakamoto, who is the mysterious inventor of this cryptocurrency, integrated this mechanism into the protocol. Once the halving process is completed, the supply of new Bitcoin is cut into half that, in turn, halves the block production rewards for miners.

When we talk about its history, the first halving took place in 2012 when the original reward amount of Bitcoin was 50BTC. However, after halving the event, it was cut into half, becoming 25 BTC. The second Bitcoin halving occurred in 2016, wherein this amount halved into 12.5 BTC per block. Since then, it has stayed the same. Since the halving event occurs after approximately every 4 years, the current 12.5 BTC will further reduce to 6.25 Bitcoin per block expectedly in May 2020.

Halving is done to increase the operational efficiency of BTC. Also, network fees reduce significantly, which ultimately increases the demand for Bitcoin. As a result, the adoption of Bitcoin is increased widely on a global scale.

You might be thinking, what’s the point? Well, unlike fiat currencies that are printed by central banks at their well, the Bitcoin supply is deliberately limited algorithmically. We all know that there will be only 21 million BTC in existence. Its finite number makes Bitcoin a deflationary asset as opposed to inflationary fiat currencies.

Furthermore, this halving event slows down Bitcoin creation’s pace so that its supply does not surpass its demand. To some people, it serves as the signal to hurriedly buy BTC as its slow growth may result in its increased prices.

What Happens after Bitcoin Halving is done?

Many cryptocurrency buyers ask whether Bitcoin prices will increase or not after the halving event. It is said that halving of block reward tends to have a positive impact on the Bitcoin price. However, one should note that a price change depends on the ratio of supply and demand ratio. The supply of Bitcoin is cut down due to halving that makes it scarce. If Bitcoin is still in demand, it is expected to rise. Actually, the price of Bitcoin depends on many factors, not just halving and demand.

So far, Bitcoin has seen two halving events. In both events, Bitcoin prices began to rise. In 2012 Bitcoin halving, Bitcoin price briefly rose from $11 to $12 before projecting to $1,038 within a year. This is an almost 9,336.36% increase in Bitcoin price.

In 2020 halving, it is anticipated that Bitcoin halving has been priced already. In case history repeats itself despite the industry changes, Bitcoin prices are expected to go up in its 3rd halving event.

Bitcoin halving also impacts the mining stability of the system. The role of miners in Bitcoin’s ecosystem is vital. Besides mining of new blocks and assisting BTC transactions, it is the responsibility of miners to maintain the overall network. Here comes the ‘Hashrate’ that refers to the computational ability of the Bitcoin network. The security and speed of the network highly depend on the hash rate. In case the miner leaves the network, transactions cannot be processed due to blocking of the network.

Furthermore, Bitcoin halving also affects miners as mining requires a sufficient amount of energy to perform calculations and cool systems performing these calculations. Also, the mining cost can range from $3,500 to $6,500; besides, it might depend on electricity and equipment costs. Due to fierce competition among miners, many small participants have run out of business.

Now you know the link between Bitcoin halving and price volatility. Also, an increase in demand for Bitcoin due to its scarcity will increase its price that can benefit you. So, what are you waiting for? Visit our website and take a chance and start investing in Bitcoin to leverage from the halving event.