Koinal > Featured > What is the Difference between Bitcoin and Traditional Currencies?

What is the Difference between Bitcoin and Traditional Currencies?

What is the Difference between Bitcoin and Traditional Currencies? 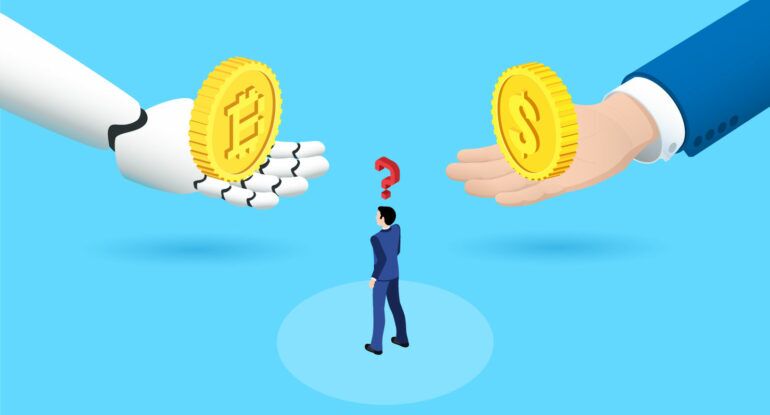 It is a type of peer-to-peer electronic cash that is referred to as cryptocurrency. Bitcoin was initially introduced by an anonymous developer, Satoshi Nakamoto in 2008. The key purpose of inventing Bitcoin was to create an online exchange payment system entirely independent of central authorities, like governments and other financial institutions.

What is Traditional Currency?

Money that is issued by the government and financial authorities is referred to as the traditional currency. This includes banknotes and coins used to purchase goods and services or utilized as a medium of exchange. Examples of traditional currency include two monetary systems, including commodity money and fiat money.

Difference between Bitcoin and Traditional Currencies

Fiat money or traditional currencies are centralized controlled by central banks, governments, commercial banks, and other payment processors like MasterCard or VISA cards. These intermediaries exercise authority over your money. Due to centralization, these organizations decide whether your transactions will be approved or not, whether money can be sent to other organizations or people.

Contrastingly, Bitcoin is decentralized, and therefore, no one can control this digital currency. This makes Bitcoin an independent peer-to-peer currency. Also, encryption techniques are deployed in this cryptocurrency to regulate the generation of Bitcoin. This digital currency is ideal for people who feel uncomfortable due to central banks’ and governments’ excessive control over their money.

In traditional currency, transactions are made using the specific codes provided by financial institutions. However, Bitcoin transactions require a digital signature that is generated by algorithms.

While using traditional currency, such as when you swipe your debit card or credit card, your personal data can be tracked by governments, banks, and businesses. However, in cryptocurrency like Bitcoin, it carries no personal information of the user and, therefore, provides anonymity to users. Also, the chances of identity theft are considerably decreased due to this privacy.

In traditional currencies, the whole transaction path is monitored by trusted third parties such as central banks and governments. However, Bitcoin transaction paths are monitored by ledger in the blockchain. Of note, this ledger is open for public access while authorized users maintain it.

Bitcoin prices are based on demand and supply. The exchange rate of Bitcoin greatly fluctuates depending on its demand and supply trends. However, unlike fiat money, Bitcoin is not influenced by economic conditions like inflation. Bitcoin exists independently and outside the traditional currency system; therefore, Bitcoin’s value is not influenced by any economic or political situation. Moreover, all kinds of traditional currencies such as Dollar, Euros, Yen, have an unlimited supply; however, Bitcoin has a fixed number, meaning that this cryptocurrency has limited coins (i.e., 21 million). This fixed number helps in avoiding the devaluation of Bitcoin.

Above mentioned are the key differences between Bitcoin and traditional currencies. No doubt, both traditional and digital currency systems co-exist alongside each other. Besides, both currencies are looking to stay here. Nevertheless, due to Bitcoin’s unceasing rise, many banks and governments are rethinking certain areas such as transaction fees.

So, if you are thinking of buying Bitcoin, Koinal can be your convenient, easy to use, and secured platform to purchase this digital currency.

Survey: 25% of US Adults Plan to Start Investing in Crypto